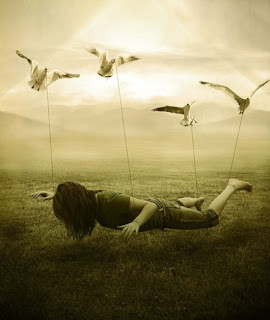 -Charlie
Posted by Gender @ Sexuality in the Arts at 7:40 AM 1 comment: 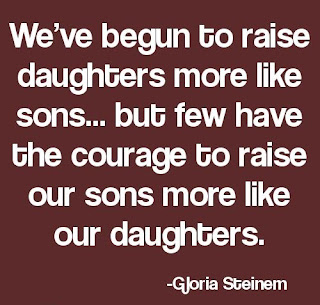 Something that is a constant battle is the fight for gender equality. Their is a double slandered on gender equality. The social standard is that a boy should have a since of masculinity. A boy never cries, he plays sports, he is imprisoned in social prison. If he decides to to vear from these norms he is outcasted and often called "gay" just because he is different. This is compleatly different for women, they are either very feminine or a tomboy they are not normally looked at differently. The social standards need to change everyone should be equal, it is the 21st century it is not that big of deal anymore.

-Charlie
Posted by Gender @ Sexuality in the Arts at 7:37 AM No comments:

Email ThisBlogThis!Share to TwitterShare to FacebookShare to Pinterest
The End of the Painted Road...

Charlie and I have had an eye opening time learning about all of the different things that we have discovered during out time researching for this project. Prejudices ideas and judgment definitely play a huge impact on the art community. Whether it is women, men, transgender, homosexual or etc., there are different options in each a object group, some that I found obvious and others I was taken back with. Women discrimination was a new thing or us and I for one did not like the idea of women being judges for the type of work they want to display right along with the men. I appreciate that people that are being discriminated against have taken a somewhat harsh approach to whatever they wanted I convey to the audience through paint. The same for photos. Because photography is such a modern outlook on a expressing art nowadays, people have become more comfortable with expressing then selves through that medium. It was interesting to see all the ways that art has evolves for both painting and photography and how people have taken advantage of that fact. New ideas are being openly discussed through art each day and we feel it is important to acknowledge such work. It forces people to visually either accept/deny what they are seein new but for the most part it really opens up people to topics such as these that they are not comfortable with yet. We took a little bit of a too open ended approach to our subtopic idea and we should have coordinated out posts a little bit better to make a easier pathway for people to go through when looking at out posts. Overall we had a good time learning new things.
-Justine Samaha And Charlie Staley
Posted by Gender @ Sexuality in the Arts at 5:28 AM No comments:

I Went to the Garden of Love...

During my research I came across a link to a photo that caught my eye. The title of the photo is "I Went to the Garden of Love" done by Evelyn Williams. A fellow blogger posted a topic dealing with her heart and said that it is the epitome of tenderness and gender biasness that is what really makes Williams work in this special. I have to agree because the gender bias idea is what originally caught my attention with this piece. We see the gender norm fashion of a woman kissing/embracing a man but then there is some homosexuality going on where men are trying to embrace other men but the women are keeping them form doing such. Does this have meaning behind it or what? I believe that this piece gives off the idea that communities are stuck in this "gender norm" idea and it keeps people from doing what feels right to them when it comes to them. 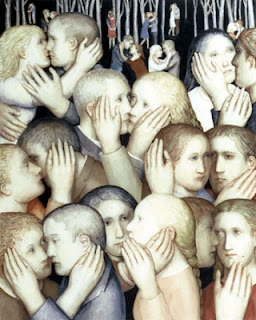 I think the women represent the gender norm that people tend to be stuck in and them pulling the faces of the men that are trying to embrace the other men away is the impact that expectations and tradition has on people. The same goes for the women in the case that they try to embrace the women but are being pulled away by the expectant man. What do you guys think of this? Are we too stuck in the gender norm way of thinking that people are reluctant to fight for what they feel is right? Do people try to keep others away from fulfilling their own desires if it's not what they want/believe is right?

Here is where I found this
http://www.tikkun.org/tikkundaily/author/philbarcio/
Posted by Gender @ Sexuality in the Arts at 10:12 PM 3 comments:

The Guerilla Girls Step Up

I thought this was something interesting to read about. Lately during my research I have been finding a lot of things on discrimination against women and painters comparing them as lesser versions of male artists. Personally I have a hard time with this topic because one) I hate sexism and two) what does gender have to do with the quality of someone's technique? This article, called women Artists Still Face Discrimination by Eleanor Bader from Truthout, talks about how an anonymous group known as the Guerilla Girls went to a museum recently and found it insulting lacking woman artists. A good portion of the nudes were of women as well and this brought up a big dispute that the women confronted. They believe that because corporate businesses and art markets play a huge part in the investment in art exhibitions like this they have a greater portion in what type of art should be shown. they basically dictate what is to be shown and what is not and if this is the case, the women of the Guerilla Group want to know why a good lot of the art pieces are from men and use women as simple objects to view. These women take on the name of some past artists that stood for such a thing, like Frida Kahlo (an artist that I mentioned before hand). I think this might be a good to look into if you art interested in the art community because I think if enough people/groups like this publically point out flaws in systems like the art market, then maybe something can be changed.

Here is a link to check it out!

Posted by Gender @ Sexuality in the Arts at 9:50 PM No comments: 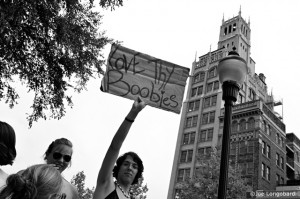 This image is from CREGS but also known as Center for Research and Education on Gender and Sexuality and this exhibition was created to bring light on issues related to gender and sexuality. CREGS decided in march that they were going to create an exhibit of photographs that were submitted by their followers. With in weeks they had images from all over the world that shows peoples openness with sexuality. I strongly belive that people should be more open with sexuality.

Posted by Gender @ Sexuality in the Arts at 9:26 PM No comments:

What makes a painting sexual?

An article that I read recently discussed the very topic on spatially wise what characteristics represent sexuality. I've always been curious about this idea because I've never really had a handle on what things in a painting actually make it a sexual painting compared to others that may have the same but are considered not sexual in any way. The article was written by Majella Clancy and Louise Wallace called Paintings, Gender and Space: Aspects of Contemporary Women's Painting Practice in Context. Based on the experiences that Clancy has with taking paint and applying it to photographic imagery and thus creating the idea of sexual differences, spatial usage, and identity within culture (factors that are similar to artist such as Ellen Gallagher and Shahzia Sikander), there are still some aspects that leave the artist in more of a uncategorized area even though a lot of these factors put it in the modern/post-modern area.


Throughout the article, Clancy makes some interesting connections to her statement. Some of the work that she has done through her stay at an art industry for the purpose of research for this article connects because it takes multiple pictures from different cultures within her life and corporates them into a spatial design that represents whatever she is trying sell in her piece. This includes a digital scan of her life dealing with the Sri Lankan Culture, old photos from her Irish side of the family, etc. Art pieces like these and other from similar artists as mentioned portray the artists cross-culture experiences as she said in her beginning statement. It is all in the way that Clancy displays each piece that shows the point she in trying to make in her piece. I never really thought that it would be that simple art wise but I am so used to painting and something more complicated being on the canvas (not that this isn't complicated) that I've become simple minded and closed off to the idea that the idea that you are trying to convey can be simply expressed through the physical feel of the idea, meaning positioning something on the canvas that in a way shows what the idea feels to you. I believe that this is what Clancy is trying to point out.
This point is made by Leo O'Donovan's article "Lifting the veil: symposium, controversial exhibit explore gay identity in art". O'Donovan explains the exploration that him and his colleagues went through with their own pieces that helped express their gay identity at the time that they were questioning it. He just used painting though as a way to portray this instead of it actually being physical things used like Clancy did. What both artists did was used the space setting of the frame for their work and combined it with the ideas that they want to communicate to make a piece that expressed whatever they were feeling.  Clancy and O'Donovan believe that it is the emotion behind the art work that is important. Without that, the piece is lifeless and can't really get a good show on what it is meant to be. The fact that they do different types of work though certainly might put an impact of their similar thoughts compared to if they were to both be working with the same type of art material.
I found this interesting because a lot of people seem to be finding a similar idea to expressing their own identity and sexuality through art. A blogger that I came across during my research names Elizabeth De Leon did a post on how she used painting as well as a medium for expressing her thoughts on her self. While this is not exactly as interesting as Clancy's art medium due to it's simplistic material, it is still an interesting idea because like Clancy and O'Donovan, she uses the color theory to portray emotion through her pieces.
Other artists such as Frida Khalo have used such expressionism as well to convey their belief in themselves. Her usage of it mostly discusses the affect that her experiences throughout life have changed her but the principle it still the same. She still seeks to show viewers how using something physical (even a thicker application of the paint) can really show how people can express enough emotion and thought behind a flat canvas with whatever idea they want to show.
-Justine Samaha
Sources:
Clancy, Majella. " Paintings, Gender and Space: Aspects of Contemporary Women's Painting Practice in Context" A Interdisciplinary Journal. 41:8 (2012) 959-975. TandFonline. Web. 20 April 2013.

Gender @ Sexuality in the Arts